Home » OCR increase – a sign of things to come? 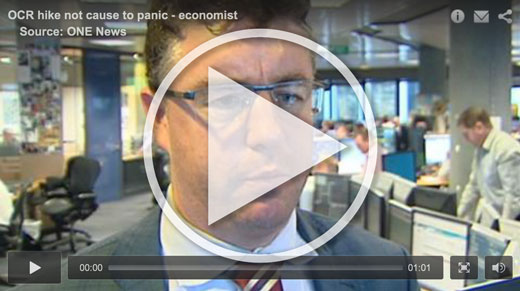 It is perhaps unsurprising then that the latest increase in OCR announced by the Reserve Bank once again propels interest rates into the national psyche.
Still, yesterday’s Monetary Policy Statement brought little, if any, surprises:

It is expected that floating retail interest rates will react first to the latest OCR hike.  However, before you start indulging in the national pastime of obsessing over interest rates and tightening your belts in a way that only Kiwis can, bank economists are saying it is too early to start panicking.

As retail banks compete with one another in a tightening market, many are predicting that the fixed rate home loan market will be the final battle ground.  Indeed, most major banks are offering competitive two year fixed rates for residential lending.

To maximise your interest savings, make sure you take advantage of the APIA [email protected] package offering all APIA members 0.25% off carded interest rates.  For more information, click here.

Market confidence – is this the beginning of the end?

Will the latest OCR hike affect market confidence?  Yes.  Should it affect yours?  No.

Be mindful that despite the latest series of OCR rises, current interest rates are grossly below historical average.  In another words, credits are still relatively cheap in New Zealand.  Interest rates are still at an all time low going back to the last 40-50 years (the only other time interest rate dipped was during the Asian Financial Crisis where OCR was at 4.75%).  It has also been demonstrated, that OCR and retail interest rates do not increase in a linear fashion.  An increase of 0.25% in OCR does not equate to a 0.25% increase in retail interest rates (especially fixed rates).  More often than not, banks would have accommodated for expected OCR rises by pricing them into published fixed rates.

What is likely to happen in the immediate future is that Kiwis will rush out to fix their mortgages as a panic response to the OCR increase.  An overwhelming number of fixed rate mortgage contracts will shock the market into a price hike.  To complicate the matter even more, this being an election year and housing being in the centre of the political storm means that negative market commentaries are deemed more palatable.

Seasoned investors know to look past short term commentaries and concentrate on broad view market movements.  With the exception of the odd short term fluctuations, the New Zealand housing market is still going from strength to strength proving to be a solid investment vehicle for everyday investors.